It seems as if I have barely fallen asleep when my alarm goes off at 5am. Well, I did wake up at 3am and 4am, just in case… My partner in crime and I stealthily dress and get ready to leave, all efforts at silence proving utterly pointless when the security guard who will escort us to the jeeps starts banging on the door and calling “Good morning!” in a badly disguised stage whisper. We hasten out and gesture to him that we are ready, but he’s not going anywhere, and instead settles down in the chair outside the door. After a few minutes we realise he’s fallen asleep. When roused, it seems that he is under the impression that our group leader was coming too – actually, so were we, but then we’re pretty sure he didn’t get to bed until well after 1am (more like 3am, it turns out), so our hopes aren’t quite as high. Apparently Charles told the guard last night to be sure not to leave without waking him, but he’s not brave enough to march into the smaller dorm himself, and makes it clear that he thinks we should be up to the task. Creeping inside, I follow the snores to our Intrepid leader and shine my torch on his face, but there is not so much as a murmur.

After twenty minutes or so, we manage to convince the guard that it will be just we two, and set off for the jeeps, pausing for a quick cup of instant coffee on the way. We are to drive through Mudumalai to the border with Karnataka, where the park continues under a separate jurisdiction and another name: Bandipur. Having started late we are not quite the first at the gates to Mudumalai, which open at 6am, but we are not far behind. Our guide, John, is looking keenly at the jungle as we drive along, and stops suddenly when he detects some movement. There in the undergrowth is a female sloth bear, its cub clinging on tight – it has just crossed the road and is disappearing into the trees.

We cross the border and turn down a side road, where we stop, seemingly in the middle of nowhere, and wait until another jeep pulls up (from a friendly resort on the Karnataka side). We are duly transferred, and bounce down the road to the visitors centre. But wait, there’s more – this was just the delivery vehicle: there is a further transfer to a larger jeep/small cantor, with seats for nine. We are in the front, and I am a little dismayed to find that behind us is a small boy who looks about three years old. Finding a tiger is a tricky pursuit at the best of times – they are solitary creatures, and well capable of blending into the jungle and avoiding the paths that our jeep is bound to follow. The best hope of finding one is to listen for alarm calls from animals in the park, then stop the jeep in a likely place and wait silently in the hope that the tiger chooses to pass your way. Which is rendered fairly unlikely if you are accompanied by a three year old. It’s not looking good for tigers.

The jeep sets off through the park as the sun rises, and the sky changes from grey to pink. There are peacocks on the side of the track and, high in a tree, large brown birds which, to my surprise, the guide names as peahens – I don’t think I realised that they could fly so high! There seem to be hundreds of spotted deer, and I’m told there are sambhar here too. 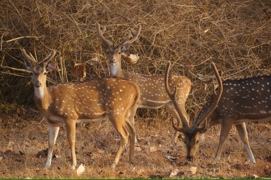 A little further along the driver stops, leans over the side and mutters to the guide: there, on the sandy path, is a clear pawprint – a tiger’s pug-mark!

The prints follow the path for a while then disappear, but the guide is on full alert. Suddenly we turn a corner and there he is. A young male, sitting with his back to the path, on the other side of a clearing. He glances back over his shoulder at us, sits still for a few minute, then lazily gets to his feet and slowly wanders towards the trees, vanishing into the scrub. 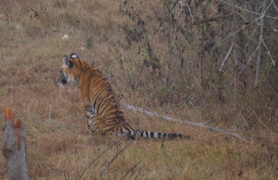 I can hardly breathe, I’m so excited!

After a few minutes, the jeep sets off, in the hopes of catching him again on the far side, but there is no sign of him, so we drive aimlessly for a while. The park is teeming with birdlife – kingfishers, green parakeets, an eagle and several others that I can’t name.

Then, up ahead, we see another jeep parked by the side of the track, its occupants staring to their right. Our respective guides exchange glances and the first jeep drives away. We take their place, and become aware of a crashing noise just beyond the tree line. “Wild elephants”, whispers the guide. A few seconds later, a large female elephant crashes into view. She is followed by three more, and there between them, sheltered from view, is a baby, doing its best to keep pace with the grown-ups. They pull leaves from a tree nearby, then rumble off to more interesting ground. 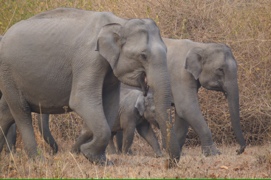 We park near a small lake and watch the birds for a while, until the guide hears an alarm call from the spotted deer. We head in that direction and stop to wait, but we have reached the three-year-old’s capacity for sitting quietly (or, more to the point, the capacity of the three-year-old’s father, the little boy is actually doing pretty well), so, after sitting for a while listening to the birds and the whispering increasing in volume behind us, the driver decides that that is our lot and cranks the engine to return to the visitors centre.

Poring over our photos on the return journey, we notice that our tiger has an injury on his back – a fight with a rival or with a less than compliant bison perhaps? Maybe this is why he allowed himself to be seen sitting in the open for so long – and I hope that the wound will heal. At the same time, I am still buzzing – and John, when he arrives to transfer us back to Masinagudi, is visibly thrilled, giving us both high fives and bear hugs.

We return triumphant to the Jungle Retreat, where the others are just waking up, having unanimously skipped the early morning bush walk that was the alternative option. I may have gloated, just a tiny little bit. But it was a TIGER! 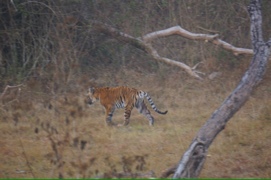