Other than the Amber Fort, there are three or four main “sights” to see in Jaipur. The exterior of the Hawa Mahal is one, and makes as good a landmark as any for the rickshaw to aim for.

The adjacent shops are waking up, and an irritation of touts is out in force. After brushing off persistent entreaties to take the stairs to a terrace (“best views of Hawa Mahal! No need to buy!”), I eventually cave and join the others up several narrow flights of stairs. The view IS good, though not significantly better, but we have been standing there only a few minutes when we hear drums down the street, and groups of men come into view, dancing and marching along with – yes, it’s an elephant!

Riding the elephant is a guru (who our Indian companions identify as Ram Dev) dressed all in yellow, and horse-drawn carts of lesser VIPs follow behind. There are hundreds of white-clad men, then – behind a cordon of men holding hands to maintain formation – thousands of women in colourful village dress, bearing clay pots on their heads. 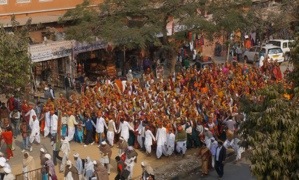 The parade goes on for ages, long enough for us to bid farewell and descend from the terrace to take a closer look. The women are friendly, and happy to be photographed (in fact some of them demand it!). 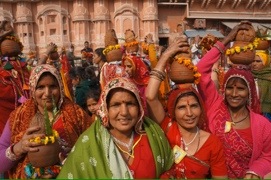 We cross and walk the length of the procession towards the source, a Krishna temple near the City Palace. The parade of women eventually give way to men bearing huge indigo banners, and a line of tractors – one of which is carrying a huge poster of someone who looks a lot like Bob Marley – they are waving banners and cheering, until the tractor abruptly breaks down and has to be pushed ignominiously to one side.

When we reach the old city gate, the last of the procession is coming through – a few incongruous white guys, also dolled up in white garments, riding horses (or donkeys), bring up the rear. Meanwhile the traffic has been building on either side of the gate, and we just manage to race through before every single vehicle tries to cross under the arch at once.

The sun is high in the sky, so we escape into the Jantar Mantar, across from the City Palace, and hire a guide (300 rupees split five ways), which proves extremely worthwhile. We are surrounded by odd-shaped sculptures, all curves and ramps, in varying sizes, painted terracotta and lemony yellow. It’s a work of genius, a complete outdoor astronomical and astrological observatory, including the world’s largest sundial, created by trial and error and careful calculation (this is the fifth, and the only complete working version), in the 18th century by Maharajah Jai Singh II.

There are sundials in different sizes for telling the time down to the nearest 20 seconds, a rotating star map with a hole for inserting a telescope, an inverted globe which shows the position of the constellations depending on the time of year (essential for determining a newborn child’s astrological charts at the exact moment of birth) – and all in perfect working order, as demonstrated by our guide (with the help of the sun overhead – don’t even bother visiting when it’s cloudy). There are even 12 separate instruments for the 12 star signs. It’s easy to imagine some kind of brotherhood of wizards in long gowns taking measurements and muttering over their findings – not entirely far from the truth….

Across the road we enter the City Palace, but it’s a bit of a let-down after the other palaces I’ve seen (save for the throne room, which has some fascinating pictures, which I wasn’t allowed to photograph – no postcards in the gift shop either, in an very rare instance of the locals missing a revenue-building trick).

The arms race was getting desperate…

By this time we’re starving, so we negotiate with a rickshaw driver to take us to Natraj, a restaurant that has been recommended. Thinking we are getting a good deal we agree to a price if he will also take us to the local branch of the Himalaya herbal cosmetics chain. He agrees with such alacrity that I’m pretty sure we’ve been played – and the grin on his face is infectious when we pull up outside Natraj and he gestures to Himalaya – which is right across the street. Worth the extra 30 rupees for sheer comic value.

Natraj has a hushed, formal atmosphere, and the food is fine (though not amazing). We try our luck with a rickshaw again, back to the Anokhi building on Prithviraj road, which also just happens to house a large branch of Crossword, the English-language bookshop, where I could happily spend an hour browsing through titles that just aren’t available in London (or, if they are, sell for twice the price). It is with some difficulty that I limit myself to three books, on the basis that I can send them home with a few other items when I get back to Delhi.

Upstairs, the cafe at Anokhi proves to be every bit as fabulous as hoped, serving strong plunger coffee and exquisite rose and coconut cake (I really want the recipe!). It’s an easy place to while away the afternoon before we have to meet the rest of the group, at the great Raj Mandir cinema: we’ve seen the filming, now it’s time to experience a Bollywood movie in all its glory.

The Raj Mandir is a confection of a building, painted in candy pinks and greens and looking like it escaped from the twenties, though it’s only about thirty years old. We have paid 150 rupees for the top-price seats in the front row of the balcony, which gives us a perfect view of the rest of the crowd: going to the movies in India is an interactive experience. When the movie starts and the hero appears there are wild cheers, which turn to loud booing when the villain (dressed in black, of course) walks on. The movie is Agneepath (path of fire) starring the improbably good looking Hrithik Roshan, and it has all the elements of over-the-top, gripping action drama, with a hint of tragic romance thrown in for good measure (in Shakespearean terms, let’s just say it’s a tragedy). There are no subtitles but (with a little assistance from the plot summary on Wikipedia at half time) it’s not hard to follow the story. 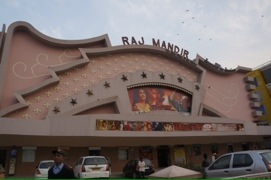 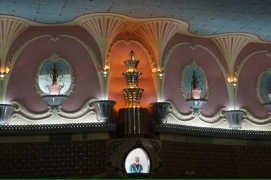 Back at the hotel after another wild rickshaw adventure, we are having supper in the restaurant and I’m idly watching the movie playing above the bar – some kind of childish comedy with a thin, preppy lead actor singing and dancing with a bunch of kids and a small alien – when I realise that the blue-green eyes look familiar. My suspicions are confirmed by the waiter – this is also Hrithik Roshan, five years earlier in a forgettable film (so forgettable I can’t remember its name), and he’s clearly spent a LOT of time in the gym since then. The Bollywood miracle?