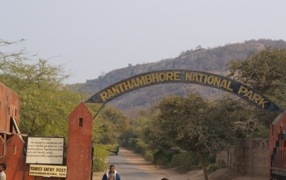 From Jaipur to Ranthambhore (my next stop) there is a long uncomfortable drive which takes all morning, with one stop at a forgettable touristy rest-stop cafe selling overpriced souvenirs.

Ranthambhore National Park was one of the first parks set up under the Project Tiger scheme in the 1970s. It has an area of around 390 square kilometres, and (depending on which count you believe) maybe 30 tigers. So there is, in theory, a possibility that we might catch a glimpse of one. Unfortunately that possibility becomes increasingly slim and then vanishes altogether as we are loaded onto a large open-topped cantor truck, which then spends the next hour stopping at other resorts (including one which is a good twenty minutes past the park entrance) to pick up more customers. Chances of this lot staying quiet? Nil.

Still, the drive into the heart of the park is very Indiana Jones, all crumbling stone paths and overhanging vines, leading to a fort which we can apparently return to explore at dawn. So. No tigers, then. But we do see crocodiles lazing on an island in the middle of a lake, and plenty of deer. 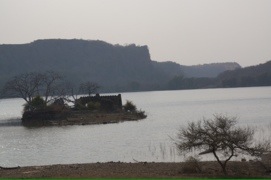 As we pass under a low branch, there is a thump and we unexpectedly pick up another passenger – a large langur, who inspects us lazily then decides the best seat is at the back, and climbs from seat to seat to perch behind us. After the squawks of surprise have receded and it becomes clear that we are not going to feed him, he allows the driver to chase him off the truck. 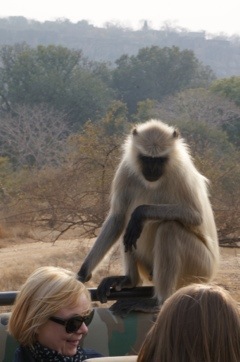 The park is beautiful, in a dusty kind of way. We see sleepy owlets perched in hollow branches, a snake-necked cormorant stretching itself into knots, more crocodiles (and drinking deer ignoring them), and a pair of mongeese streaking low across the ground. 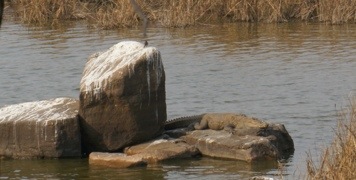 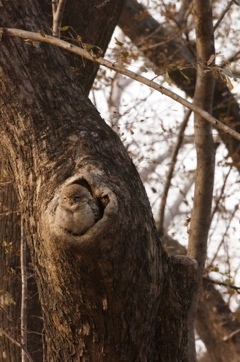 We stop by another lake, and attract the attention of some curious treepies – just like magpies, but yellow and black instead of black and white – and one drops down to perch on the cantor and take a closer look. 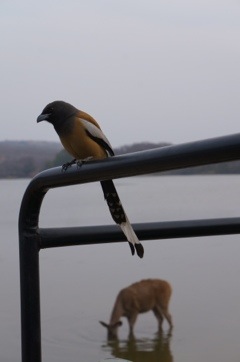 The safari lasts about two hours, by which time the sun has set and it is getting seriously cold. By the end of the long reverse journey to drop everyone on the cantor back to their hotels, we are frozen, and nobody is interested in sitting outside to listen to the musicians the hotel has put on for us – instead we huddle in the restaurant for dinner and a couple of token drinks, then head straight to bed.