I know that the car is approaching Jaipur when we begin to climb a narrow road with ancient stone buildings closing in on the sides. The traffic continues to follow the main tenet of Indian driving (at all costs, get in front), so it’s a slow journey. Coming over the pass and down into a valley we see a lake, and beyond on the hilltop a vast fort, with a high wall on either side, spanning the ridge line of the hills around us.

This is Amber Fort (confusingly, the ‘b’ seems to be silent), the present version of which was apparently built in about 1592 for a Rajput Maharaja. We drive most of the way though narrow medieval streets and up a steep cobbled road towards the vehicle entrance – it’s possible to climb the hill by elephant, but not a lot of fun for the elephant.

Walking the rest of the way, we emerge in the main public courtyard, which is far more colourful than usual: market stalls have been erected, music is playing and orange, pink and blue banners are waving in the breeze. It takes a moment to realise that this is just a Bollywood set. 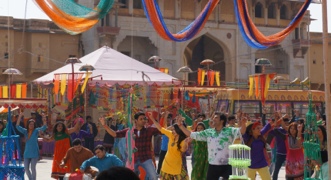 In front of us a choreographer is taking the star, Abhishek Bachchan (son of the “godfather” of Bollywood, Amitabh), through his slightly wooden paces, while extra hang about and occasionally run to join in. In the two hours that we are at the fort, we must hear the same few lines of the same song a hundred times – apparently they have been at this song for three days, while the choreographer develops his/her “vision” for the piece.

We are greeted by our tall, dashing guide, Mr Singh, who looks himself as if he has just stepped out of a Bollywood movie, with his raybans and cravat (I’ve never actually seen someone wear a cravat in real life!). He later admits (with some pride) to playing a general in a recent movie, Mission Istanbul. 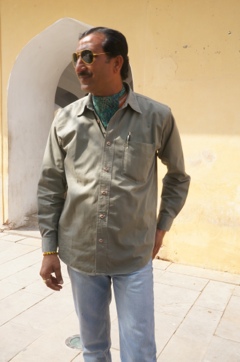 He leads us through the four courtyards of the palace, to the hall of mirrors and the hidden dancefloor from where the in-crowd could not be seen, but could still observe the public goings-on below. There are gardens, water features, elaborate zenana apartments (with a private entrance so the maharaja could visit his favoured wife in secret), stained glass and painted ceilings. There are rooms for winter use, mirrored to make the most of the sunlight, and summer rooms with water features and hooks for hanging fans. When one maharaja’s mother lost the use of her legs (our guide: “she no longer wished to walk”), ramps were built throughout her quarters and parts of the palace so that she could be wheeled from level to level in a rare early nod to accessibility.

When we emerge from the palaces to the main courtyard of the fort, the Bollywood crew are still going strong. Leaving them to it we drive the 11km into Jaipur, and seem to just about drive right out the other side. Our hotel, where we are greeted with garlands of marigolds, is quite lovely – the nicest yet – in heritage style, with large rooms and corridors lined with sepia prints of maharajahs past and some rather disturbing hunting parties from bye-gone days. It is, however, a good twenty minutes or more by bumpy rickshaw from the centre of town, and the rickshaw drivers in Jaipur are the craziest yet.

After lunch, we take rickshaws back to the old walled city, which was meticulously planned by Maharajah Jai Singh and built in the early 1700s – right down to the grid pattern of the streets and the numbering system for each of the shops.

Our trip leader takes us for a walk through the old city, from the City Palace to the terracotta-coloured Hawa Mahal, or Palace of the wind, then through the bazaar towards the newer part of town – Jaipur is famous for its silver and gems, and some of the group have serious shopping to do, so we are headed for some of the more reputable shops. I’m not in the market for silver or gems, so after admiring the jewels for a few minutes I head to Anokhi: the original branch of the small fair trade clothing chain that we discovered at Khan Market is here in Jaipur – and they are having a sale! They are also having an invasion of pushy Chinese tourists, and a severe staff shortage, and it turns out I’m not feeling as patient as I could be, so after a quick look it’s time to head back to the hotel. On the way out I notice a cafe attached, which promises safe salads, homemade breads and cakes, and best of all plunger coffee! I plan to return and try it out before I leave Jaipur.