It is pitch black outside when we leave for New Delhi station to catch the Shatabdi (express) to Agra, leaving early to make the most of our single day there.

The train is easily the nicest I’ve been on, and is apparently the fastest in India. It’s also full of package tourists, and a new game of “American tourist bingo” (in the vein of Auroville bingo) is soon in progress. I imagine someone somewhere is playing a similar game of Intrepid Travel bingo…. or backpacker bingo, perhaps.

We watch the sun rise over the villages and fields as we speed by.

A couple of hours later we are in Agra, bound for the Red Fort and one of the best guides of the trip. If only I could remember his name! He is passionate about the history of the fort and the Mughals, and manages to convey the details of daily life in the fort in a way that really brings the building alive. The fort is huge, built of red sandstone blocks with a moat and drawbridge, and a surprising number of small palaces inside. It was built by Akbar (son of Humayun) in 1565 or thereabouts. 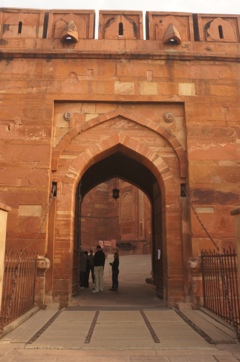 We see the beautifully decorated rooms where Akbar’s grandson Shah Jehan ended his days before joining his beloved Mumtaz in the Taj Mahal (he was kept under house arrest for spending too much money on monuments, among other pretexts, by his youngest son, Aurangzeb – plotting with his sister and having killed his remaining brothers to secure succession, a familial trait).

There are paintings and beautiful inlaid stones set into marble – not precious stones anymore, but sufficiently colourful that you can imagine how it would have sparkled. There are water features everywhere, and clever use of wind and water to keep the rooms cool in summer, with hooks to drape curtains from and rugs on the marble ground to keep the rooms warm in winter. It’s probably heretical to say so, but I almost found the Red Fort more interesting than the Taj Mahal, magnificent though that is, just because so much more happened here – all the romance and political intrigue of empire. The Taj Mahal is stunning, but it’s basically just an over the top tomb, right?* 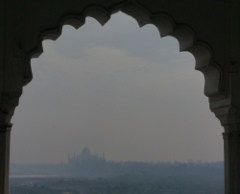 View of *that* tomb from the Red Fort

We check in to our hotel (which is your average clean, tidy business hotel, everything works but not a lot of personality), and are mobbed by the kids whose parents are working on the construction site next door. They’re not asking for anything (though it’s clear they don’t have much); they’re just curious and want to say hello.

Lunch is at a touristy place with a roof terrace, and I notice that the prices are higher than they were in the south – though it could just be that we are a captive market: there’s not much else going on in Agra, and it’s a bit of a dive, save for the Red Fort and the main attraction.

The best time to see the Taj Mahal is at sunrise or at sunset, and it’s late afternoon when we finally arrive. There is the usual phalanx of touts to ignore, and a queue for security (no food to be brought in either). We are given paper slippers to wear over our shoes when we get to the tomb, and pointed towards the main entrance.

Even the entrance gate is a spectacular arch of sandstone. The tip of the Taj Mahal is visible behind, but it is still a majestic sight when I step through the archway. 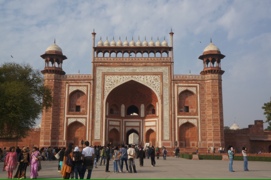 And there it is.

There is a steep foreign price (750 rupees!), and a much cheaper Indian fee, but the advantage of the foreign ticket is that you get to skip the gigantic queue that snakes all the way around the building. Inside, there are strictly no photos, and crowd control is fierce. All is symmetrical, save for the slightly higher marble box that is Shah Jehan’s tomb – the building was not designed with him in mind.

Check out the queue

Outside, the Yamuna river snakes past, and we sneak a couple of pictures before we are swiftly moved on by another man in a beret with yet another magnificent moustache.

On either side of the main tomb are red sandstone mosques, one of which still operates, and the other which is open to tourists (behind a slightly confusing “Indians only” sign, which turns out to relate to the queue for the Taj Mahal, not the mosque).

A young couple sits together holding hands at the end of an arched corridor, which seems kind of fitting for a place which was built to commemorate a great love.

The sun is low in the sky as we leave, providing plenty of opportunity for pictures of the Taj mirrored in the fountains. 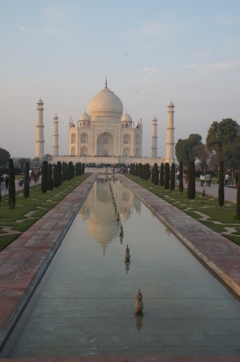 That night there is a wedding celebration in the hotel, the gardens decked out in shiny ribbon and the members of the brass wedding band each playing a different tune again – the modern version of an Indian love story is a bit more clamourous and colourful than its predecessor.

*just a little tongue in cheek