Karol Bagh is situated roughly half way between the former British capital that is New Delhi, with its wide streets and Lutyens bungalows, and the Old Delhi of Shahjehanabad – the former Muslim capital founded by the Mughal emperor.

It is in Old Delhi that we start our tour, first catching a local bus outside the metro station. The conductor calls the destinations out the window at each stop, a fistful of rupee notes in his hand.

The morning traffic includes a slew of cycle rickshaws and the occasional oxcart. 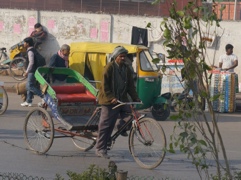 We step down at the stop across the road from the Red Fort, impressive from the outside but apparently not as fine as the one in Agra, which we will see soon. Instead, our destination is the Jama Masjid, a huge mosque which was once occupied by a Sikh regiment after the so-called Indian Mutiny (or first war of independence, depending on your chosen historical perspective).

Today it is full of tourists and, after leaving our shoes outside, the women in our group are required to don brightly coloured overgarments which cover us from top to toe – all of us have shoulders and knees covered, so I can only assume that the blanket policy of, erm, blankets is a combination of money-gathering and just generally making female tourists look ridiculous.

We also need a token male with us if we are to climb to the top of the minaret, and luckily there is one guy in our group prepared to make the climb. The view from the top is fantastic, though curtailed slightly by the haze of pollution around the city.

Below us on one side is the Red Fort. On the other, a warren of alleyways, the bazaars of Chandni Chowk, and it is into this maze that our tour leader takes us next, past rows of shops selling nothing but ribbons and trim for wedding clothes, another selling sweets (where we do stop to taste some of the peanut and sesame toffees) – he sets a swift pace though, so there is little chance to stop and take photographs.

Emerging from the network of lanes, we find ourselves on a wide street, at one end of which is a large Sikh temple, the Sheeshganj gurdwara. Inside the complex, underneath the temple, we leave our shoes and don headscarves (the boys too this time, all heads must be covered, and scarves are provided for anyone who needs them). We walk through low jets of water to wash our feet, then ascend the main steps to the temple. Inside, three men are playing a drum and a harmonium, and half singing, half chanting readings from the Sikh holy book. We find a spare space on the carpet at the back and listen for a while. The atmosphere is peaceful and meditative.

Outside, we find the kitchen, where a turbaned Sikh is stirring a vast vat of halva. 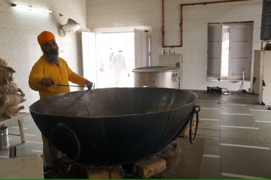 Further on, people are making chappatis and, in the hall beyond, about fifty people are seated on the floor in long lines while food is distributed. It is part of the Sikh philosophy that free meals be provided to anyone (of any creed or none) who needs or wants it – and not just the poor, as it is hoped that people who eat in the halls will donate what they can, either in cash or in time spent in preparation of the meals. It’s a pretty cool concept.

Back on the street the traffic noise is a bit jarring. To get back to the hotel, we take the flash new metro, most of which was completed in time for the Commonwealth games in 2010. It’s the equal of any underground I’ve been in, and cleaner than most (certainly cheaper!). Security is high – every single bag is scanned and person searched as if at an airport. I can imagine riots breaking out if they tried to introduce a similar policy in London, but here it’s is just something else to build in extra time for. Entry is by a small plastic token with value loaded for the trip (like a miniature oyster), which is swiped on entry, and dropped into a slot on final exit. There are also one day tourist cards which are pretty good value (100R for one day, 250R for three, plus a refundable 50R deposit). The other advantage, given the famously gropey hands of certain Delhi males who ought to know better, is that the first car of each train is for women only (well, it says ladies, but I presume they’ll make an exception), and often less crowded than the other cars.

With the rest of the afternoon free, there is just time for the three musketeers (being the three solo travellers from the South Indian trip) to find an autorickshaw to take us to Humayun’s tomb, a kind of mini-Taj Mahal in red sandstone to the South near Hazrat Nizamuddin station. I don’t know if it’s our pronunciation but it takes a while to find a driver who knows where to go – in the end we get as far as Khan Market and ask for directions.

Our driver waits while we go inside. Humayun was the second great Mughal emperor (after Babur and before Akbar, in case you were wondering). After a life of dramatic battles and intrigue (he killed most of his brothers to secure the throne), his death was utterly mundane – he tripped on his robe while running downstairs, cracked his head and that was that. His tomb, however is quite something – a rare oasis of green parkland, with the red sandstone dome soaring above.

One of the displays shows a picture of pre-British Delhi, with smaller domed cenotaphs dotted across the land. 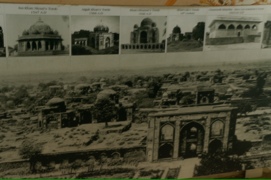 The tomb seems to be under constant renovation, and the site hosts regular training workshops in the use of ancient carving and building techniques, such as the elaborate stone grills, or jali-work, in place of windows. This is the sort of place to which you could bring a book and a picnic and spend a peaceful afternoon away from the noise of modern Delhi.

Since we are in the neighbourhood, we make a quick stop at Khan Market, and immediately wish we had longer. There is a branch of Fab India here, and also a branch of Anokhi, which may just be even better than Fab India. There is also a camera shop which has a single precious 49mm UV filter for my camera – the original was smashed in a heartstopping incident in Periyar. There is nothing else for it – we’ll have to come back here to investigate properly when we return to Delhi.

That evening we return to Om Saravana Bhavan, a brilliant South Indian cafeteria just around the corner from the hotel, for dinner. I had asked our trip leader that morning for a cheaper alternative to the mediocre hotel breakfast buffet, and he directed me here. When I walked in at 8am, I was the only foreigner in the place, and smoke was billowing out the door as a priest performed some kind of ceremony that involved lighting a small wood fire on the bare marble floor. But once past the smoke, I was seated with courtesy and served a delicious masala dosa and South Indian coffee within minutes, for half the price I would have paid for toast and dry omelette in the hotel.

We are just finishing up when everyone else from the group walks in to join us (news of good food travels fast) and I’m already looking forward to coming back to Delhi in a couple of weeks time for a return visit.