It is another early start, though my alarm doesn’t stand a chance between the various muezzins and church bells competing to call the faithful to prayer. Our packs are loaded into and onto a convoy of autorickshaws for the trip to the station in Ernakulam – my rickshaw is having technical issues (though I’m not sure how technical a tricycle with a motormower engine can get) and we trail behind the others. At one point I am tempted to get out and help to push it over a bridge, but eventually we reach the station and find our seats in AC chair class. 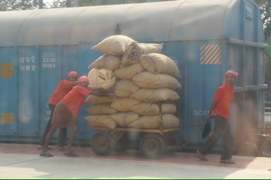 Once the train has started moving, Charles takes a few of us through the general cars and down to the pantry car, to see how it all works “backstage”. The catering for each train is put out to tender, and the caterer for this train keeps anything that he earns above an agreed price, which goes some way to explaining the constant stream of attendants proffering chai, coffee and snacks up and down the aisle. In the pantry car the heat is incredible. Huge vats of veg and chicken biriani are being prepared on gas burners, and in a small compartment two men are chopping onions.

The external doors remain open throughout the journey, and the path back to our seats is an obstacle course of stray legs, as passengers in the non-AC carriages enjoy the breeze from the doorway. 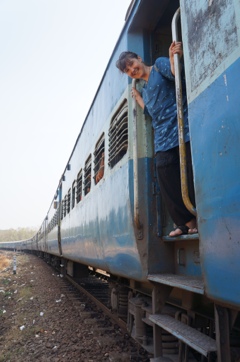 On arrival in Coimbatore we transfer to a minibus, and zoom through the outskirts of the city. Coimbatore was devastated by a series of bomb blasts back in 1998, and has undergone considerable reconstruction, including a road network that seems to be a labyrinth of concrete barriers.

We stop for lunch at a roadside diner on the edge of the city, part of the Annapurna chain. It’s a vast cafeteria, and the service is quick: metre-long paper dosas with coconut chutney and sambhar, and black coffee served in metal tumblers nested in shallow bowls. Charles shows us how to tip the boiling coffee from one to the other until it has cooled enough to drink. 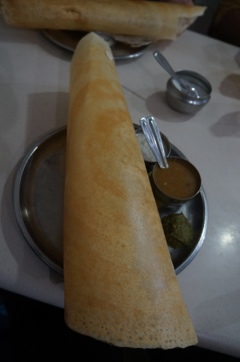 On the road outside, a street vendor is selling guavas, greenish-yellow and fragrant. I pick out half a kilo, and the vendor gestures for me to take a photo. Well, if I must… :). 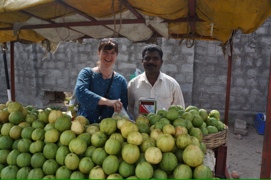 The bus takes us from Coimbatore towards the foothills of the Nilgiris, then begins a tortuous series of hairpin bends up into the hills towards Ootacamund, or Ooty as it’s more commonly known. The view is stunning, but those of the group prone to carsickness are feeling miserable as the bus winds back and forth, overtaking trucks and jeeps at every opportunity (did I mention that the signs forbidding overtaking on blind corners are really just for show?).

On first glance Ooty doesn’t seem to be an especially pretty town, with the usual crazy traffic and random concrete buildings in various states of construction. It was a popular summer retreat in the time of the British Raj, famous for polo, parties, and making an extreme sport of clique-dom and snobbery (hence the sobriquet “snooty Ooty”). These days, there are a number of expensive “international” schools (where the children of the privileged sit the International Baccalaureate in lieu of local exams), and an inordinate number of chocolate shops. There is also a botanic garden (which is apparently quite lovely), a small boating lake, and a racecourse which looks to be completely abandoned and overgrown save for the shanties in one corner. Charles assures me it’s just the offseason and that races will re-commence in the summer, but I have my doubts.

We check into our hotel, which is uninspiring. It’s clean enough, but pretty soulless, and the bathrooms have odd little open windows that face directly onto the internal corridor, so that your screams of shock when you duck under the icy water emitting from the “hot” tap can be heard by whoever happens to be passing.

We head for the markets in search of some local colour, and find it in abundance. The market is buzzing with activity, even though it’s now late afternoon. I hold my breath down the lane of butchers (which is also buzzing, for a different reason), and past the sole fishmonger. Bearing in mind that the sea is some hours away, it seems best to avoid the fish (and apparently he was selling the same sorry specimens when someone went back to the market the next day).

The floral market is easier on the nose – though I’m careful not to sniff too overtly: apparently it is bad form to inhale the fragrance of wreathes meant for temple offerings before the gods have had their turn.

There are baskets of limes and pomegranates, garlands of bananas in green, yellow and red, huge piles of raw peanuts ready for roasting, and, just around the corner, a chai wallah who serves us all a sweet, hot cup of masala chai.

Across the lane from the chai shop is a small shop filled with huge sacks of rice – a local government scheme, apparently, to provide affordable rice to those who could not otherwise afford it. It’s the first example of any kind of state safety net that I’ve seen, and it’d be interesting to know how far the scheme extends. Based on the volume of political advertising and the number of photos of the Chief Minister surrounding the shop, it appears to be a key part of her re-election policy.

The sun is starting to set, and there is a general consensus that it is fast approaching G&T o’clock. Charles knows just the place, and leads us through town and up a short sharp hill towards the Government Rose Gardens. It is getting dark now, and I can’t say I notice any roses, but we are passed by a couple of riders on smart-looking thoroughbreds (the effect is ruined somewhat when one bellows “you want ride? Horse ride?” – an opportunistic out-of-work jockey, perhaps…). At the top of the hill we saunter past a security guard and into the bar of a fancy five star hotel, which appears to be almost entirely empty but for the staff, who don’t bat an eyelid at our – shall we say informal – appearance. A few G&Ts, pints of kingfisher and assorted hot bhajis later, we barely notice that the temperature has dropped to about 2 degrees as we tumble back down the hill to our own, less salubrious, accommodation.