It’s nearly dark when we reach the entrance of the Kerala Kathakali centre near Santa Cruz Basilica. I buy banana chips fried in coconut oil from an old woman sitting by the door, and we file in to find our seats. On the small stage, three men in sarongs are carefully applying thick makeup with the aid of tiny wooden mirrors. 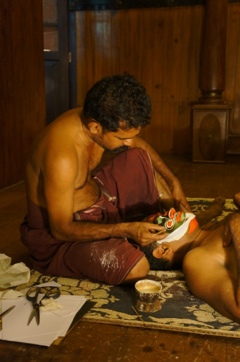 A man in white is lighting oil lamps around the edge of the stage. He carefully stamps intricate designs along the aisle with white powder. We tourists pull our cameras out, try to reach our seats without dislodging the designs. There is an audible groan from the (mostly foreign) crowd when one man stomps right through them, oblivious. 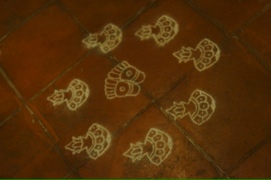 The man in white takes the stage, and two men line up stage right, strapping drums around their waists and beginning a gentle rhythm. The man in white begins to chant, then breaks into halting English to welcome us, and to introduce the evening’s performance.

Kathakali is a highly stylised form of dance that dates back to around the 17th century. While there is occasionally movement that is recognisable as dancing, the real art lies in the finely nuanced expressions of the performers, and the series of hand movements known as mudras. Before the performance starts, an actor is summoned to demonstrate first the eye movements, and then the mudras. His eyes are bloodshot red, an effect achieved by putting a particular kind of seed into his eyes for several minutes. My eyes squint shut in sympathy. 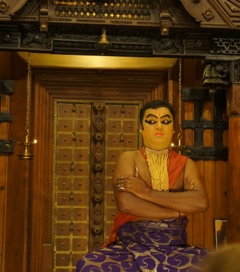 One of the girls in our group is a dancer, and has taken lessons in classical Indian dance while she is here in India. She reports spending the entire first lesson practising moving her eyes in a complete circle, from right to left and then back again. After an hour she had yet to meet her teacher’s demanding standards – but then, it can take 10 years to master this form of dance, so I imagine it must take at least a year of that to perfect a good eye-roll!

After the eyes come the hand gestures. Some of these prove to be less subtle than I had anticipated – there are multiple ways of saying “come here”, from a suggestive raise of the eyebrows to an emphatic pointing gesture accompanied by a stamping foot! The gestures become increasingly elaborate. My favourite (and one which two members of our group have developed into a superb and slightly risqué party piece) is said to represent the bee landing on a lotus flower.

At last it is time for the performance proper. Two uninterested-looking pot-bellied men in sarongs enter, and turn out to be the official curtain raisers – they hoist a rainbow coloured quilt between them, and for the first ten minute or so all of the action appears to be happening behind it. The man in white turns out to be the singer, alternately chanting, singing, and providing short explanations in English. 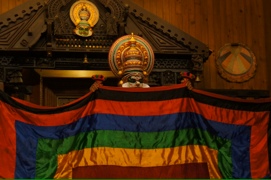 As seems to be the way in South India (and maybe the North too, for all I know), the gods are ever-present and each performer conducts a small ritual when entering the stage, before bowing to each of the singer and the musicians. The story is an excerpt from a longer play – in the days when villagers would travel huge distances for religious festivals, the performances would last all night, and would be attended in lieu of finding accommodation. While that must be quite a spectacle on the rare occasions that a full play is performed, I’m a little relieved that we are only being treated to an excerpt. It’s fascinating, but the more subtle details are lost on me, though the ritual-like aspects remind me of Japanese kabuki on a smaller scale. 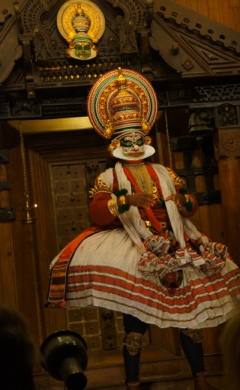 I can tell you that the plot revolved around the anti-hero (indicated by a bright green face marked with red, and an elaborate skirted costume) attempting to abduct a beautiful lady (played to hammy effect by a man with bright yellow makeup, in stark contrast to his dark brown hands), who escapes and returns to her husband with the ruse that she will meet the bad guy later.

The husband hatches a plot for revenge, lying in wait under his wife’s robe. When the evil-doer appears and tries it on, the husband leaps up and slays him. There is no sign of a lotus, let alone a bee flying anywhere near it, but this in no way reduces the campness of the evening.

The performance lasts an hour and a half, plus makeup time. The cost was approximately 250INR. It’s a glimpse at a unique part of South Indian culture which, while it might not be everyone’s cup of tea, is certainly worth seeing at least once.