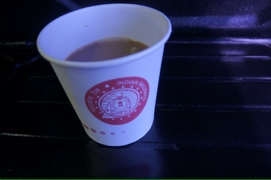 Overnight sleeper trains in India travel at their own sweet pace, which often may even bear some semblance to the timetable, though that cannot be guaranteed. This makes setting an alarm clock an exercise in guesswork. So far, my destination has been the final stop, so instead of an alarm clock I am alerted to arrival by the sudden rush for the exit (the train having stopped not being a reliable indication in itself). The effect of this method is that I arrive at my destination – in this case Bangalore – in a state of sleepy confusion.

Shouldering my pack I make my way doggedly through the crowd, one step ahead of the porters who are visibly unimpressed that I should do their job for them and carry my own luggage. The plan is to find the taxi rank, but as I pass a cafe I am approached by a man finishing a coffee, who speaks excellent English (for future reference, if you are a tourist and approached by someone with excellent English, odds are they will be a tout, not a local). He shows me a printed card of taxi rates, and I figure one taxi is as good as the next and follow him to the car park where all the other taxis are parked. Only, his taxi looks more like a minivan, doesn’t have a meter, and has definitely seen better days. We rumble off down darkened streets, which seem to get narrower with each turn, and I begin to wonder if I’ve made a mistake. This is compounded when he tells me that the airport is 40km away, but googlemaps tells me it’s only ten.

Again for future reference, it turns out that the tagging function on googlemaps is a pile of crap. Also, after long train trips sometimes your brain just doesn’t work. After a heated debate about where we are going and where the airport actually is, it dawns on me that the chances of the airport being in the inner city are minimal. Checking a completely different source (the airport website itself) it turns out that the taxi driver is right. He is also not a wily scheming kidnapper. At most he has overcharged me about 200 rupees (£3), which he probably needs more than I do.

After muttering the Indian equivalent of “I told you so”, he drops me right outside the correct gate at the terminal. Behind me, the sun is rising over Bangalore in a fiery ball of red. Perhaps next time I’m here I will have a chance to look around – it’s supposed to be worth a visit. For now I’m about to spend 7 hours in the airport (thanks Kingfisher!), which ranks next to Brisbane airport for lack of facilities (though it does have phone recharging stations, 45 minutes of free wifi, and a small colony of sparrows in the canteen).