With only a couple of days in Mumbai, I wanted to see as much as I could of the different facets that together make the city. As a solo woman traveller in a country where women don’t generally venture out alone at night, it seemed like a good idea to sign up for some kind of tour where I might meet a few fellow travellers as well as getting the kind of insight into Mumbai that only a local could provide.

With this in mind, I got in touch with Reality Tours, a local Mumbai outfit which is best known for its educational tours of Dharavi, the massive slum which will be familiar to anyone who has read Shantaram. The tours operate a strictly no-photo policy, and focus on the positive aspects of Dharavi life, the small businesses and examples of the entrepreneurial spirit required to survive there. All profits are put to work running a community centre within Dharavi, and because of this the locals are more receptive to tourist visitors than might otherwise be the case. I didn’t have time to do the Dharavi tour, but they have recently started a “Mumbai by night” tour, which promised to show the main tourist sights as well as some less well-known places.

After some delicious chana masala and a beer or two with the English/Sth African couple from the hotel, I set off to the meeting point for the tour. My first surprise was that I was the only one on the tour – so I had an “exclusive” tour for only INR850! As I was the only customer, we took a series of local taxis rather than the usual rented car. My guide was a young Hindu man who had grown up in Dharavi. We’ll call him J, mainly because I failed to write down his full name at the time… We meet at the Regal cinema, a British relic in 1920s style, then navigate our way across the lanes of traffic (I say lanes, they are more of a guideline) to the first taxi, a black and yellow special.

Our first stop is Chowpatty Beach, where the snack stands are in full swing and small children weave in and out of the crowd while families picnic and couples try to find privacy in the shadows. 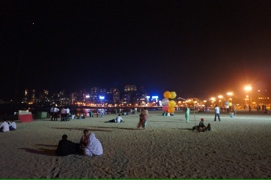 We drive along the parade and climb Malabar Hill, pausing at the hanging gardens (and dodging the morality police, who stop J – apparently they are known to inform parents of unmarried couples they come across, and to impose fines on anyone acting “inappropriately”. Satisfied that J is a tour guide, they allow us into the park). From the gardens there is a stunning view back along the bay, with a string of street lights picking out the Queen’s Necklace below. One building in particular glows brightly – not the famous Taj Mahal hotel, but what my guide calls the “Indian Taj”, a Muslim-run hospital which is lit up only on special occasions. This weekend is Makar Sankranti, a festival celebrated by flying kites with lethally sharp strings, and he speculates that this is the reason for the lights.

Leaving the gardens, we pass by a Tower of Silence, the site where Parsi take their dead to be laid out to decompose (macabre, I’m sorry – and more so that vultures hover at the site). According to J around 50% of the land in South Mumbai is Parsi-owned. I’ve noticed a few compounds in the city already which are signposted “Parsi only”. Stopping at a Jain temple, we peek inside – tourists were once allowed inside, but after too many covert photographs we are now confined to the courtyard.

A highlight of the tour is a trip to Banganga, reputedly the site where Lakshman, on having his request for fresh water refused as the locals themselves had none, shot an arrow (ban) into the ground, causing a freshwater spring to flow. Locals believe that the spring is connected to the river Ganges (ganga), and the terraced reservoir provides a local alternative for those who cannot make the trip far north to cast the ashes of their loved ones into the river. When we arrive, the air is hazy and the lights give off an eery glow. We enter through the courtyard of a shrine, which feels more like somebody’s backyard – a woman is changing a baby’s nappy, and small children stare up at me – but J assures me this is the priest’s family, that in fact the shacks along the edge of Banganga are mostly inhabited by priests and their families. The reservoir itself is deserted and still – its hard to believe we are in one of the world’s most populous cities. 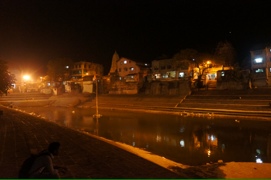 Returning to the clamour of the city, we drive through night markets and then turn along Grant Road. This is the city’s red light district. J says “no photos here”, but my camera is already packed away. According to J, few years ago there were as many as 60,000 sex workers in this area. Girls are sold to pimps by their families or conned into servitude, their meagre earnings never quite enough to buy their freedom. Now, apparently, official records list a mere 8,000 – not that there are fewer, more that they have been dispersed across the city. Prostitution is illegal, but J says the police turn a blind eye, and run patrols along the street for the safety of the girls (the cynic in me is less sure of their motives). Many of the girls I see are heartbreakingly young, and I am glad when we reach the end of the road and move on. I have seen real poverty here, but this is the first moment that Mumbai really reaches out and seizes me, and I feel so much anger towards the men who create a market for this. It is a relief to move on (but I am intensely aware of how lucky I am to be able to do so).

The tour comes to an end at Chhatrapati Shivaji terminus (formerly Victoria Terminus), a Gothic Revival masterpiece and one of the busiest stations in Mumbai. It’s also conveniently close to my hotel, the Fort Residency, so (after checking with J that it’s safe to do so) I set out on foot for the sanctuary of my hotel room.

If you’d like to see the rest of my Mumbai photos, they’ll be available here.